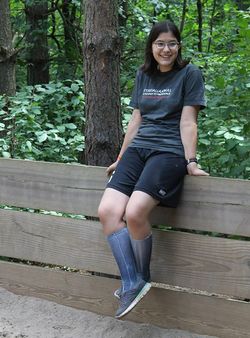 1. Baltoro Glacier
2. House's Chimney
3. The Serac and the Summit

K2, Anika Arvanitis's debut piece, is named after the second tallest and second most dangerous mountain in the world. K2 follows the journey of a climber up the mountain, from the Baltoro Glacier at the base, to House's Chimney, a section of technical rock climbing right below camp 2, and finally to the serac, a glacier that overhangs the bottleneck right below K2's summit. This piece is dedicated to her grandmother.

I was inspired to write it by my research into the 2008 K2 disaster, which is one of the worst mountaineering disasters in history, and because I love marimba and think it deserves more parts.

K2, at 28,251 feet above sea level, is the second highest mountain in the world, after Mount Everest at 29,029 feet. It is located on the China–Pakistan border between Baltistan in the Gilgit-Baltistan region of northern Pakistan, and Dafdar Township in Taxkorgan Tajik Autonomous County of Xinjiang, China. K2 is the highest point of the Karakoram range and the highest point in both Pakistan and Xinjiang.

K2 is known as the Savage Mountain after George Bell, a climber on the 1953 American Expedition, told reporters "It's a savage mountain that tries to kill you." Of the five highest mountains in the world, K2 is the deadliest where approximately one person dies on the mountain for every four who reach the summit. Also occasionally known as Chhogori, or Mount Godwin-Austen, other nicknames for K2 are The King of Mountains and The Mountaineers' Mountain, as well as The Mountain of Mountains after climber Reinhold Messner titled his book about K2 the same.

Although the summit of Everest is at a higher altitude, K2 is a more difficult and dangerous climb, due in part to its more inclement weather and comparatively greater height from base to peak. As of June 2018, only 367 people have completed the ascent. 86 people have died attempting the climb.

The summit was reached for the first time by the Italian climbers Lino Lacedelli and Achille Compagnoni, on the 1954 Italian Karakoram expedition led by Ardito Desio.