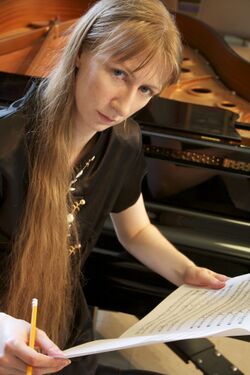 Justine L. Koontz is an American composer, conductor and educator.

As a composer, Koontz writes primarily for choir and chamber ensembles in musical languages that are accessible yet diverse. She takes as her inspiration literature, modern dance, applied science, and spirituality. Her compositions have been performed at local, national, and international venues, including performances at the 2019 London Festival of Contemporary Music, the 2018 Intercollegiate Men's Chorus's National Seminar, and the 2012 World Choir Games.

As a conductor, Koontz is especially interested in new music and has premiered works at Butler University and at the Oregon Bach Festival Composers' Symposium. As an advocate for community music-making, she has worked for a variety of churches as a choir director, and has sung with a wide variety of community choirs. She is currently [2021] the Music Minister at Memorial Episcopal Church in Baltimore.

Other musical activities have included international scholarship and teaching. Koontz completed a year of study in Latvia on a Fulbright scholarship, where she researched the country's choral culture. Her research on this topic has been disseminated through blog postings and a presentation at the Association for the Advancement of Baltic Studies at Stanford University. As a teacher, she has led a number of workshops for children in Indianapolis and Baltimore. She also teaches a private studio of piano and guitar students of all ages.