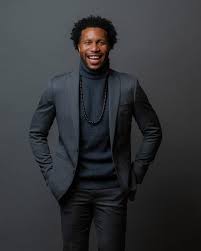 Mr. Hall was raised in a New Orleanian household by his military father and educator mother along with an older brother and younger sister. Through primary school, Justin was involved in choir, band and took a couple of years of piano lessons. During middle school, his family relocated to Derby, Kansas, from Anchorage, Alaska. High school introduced him to marching band, madrigals, drama, drumline and the Wichita Youth Orchestra program, where his love for large ensemble music really took off. He was already taking private lessons for percussion and stayed auditioning and getting selected for state ensembles and receiving high marks for his solos during festival season.

Justin graduated from Wichita State University with his master's degree in music performance in 2019. He’s worked as a drumline Instructor since 2009. Justin has also been the music director at Holy Savior Catholic Church since 2014, and been singing with the gospel choir since 2009. Most recently, Justin has worked with the Forum Theatre as a composer and assistant music director, having received a Mary Jane Teall Award for his original music in the Forum Theatre's production of The Agitators, his first professional gig writing music for theatre.

In addition to his music career, Justin does professional commercial modeling and acting.