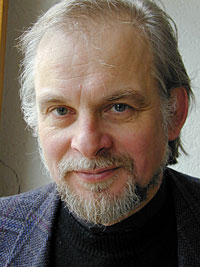 Filas had intended to become an opera singer. He graduated from the Prague Conservatory in 1976 in voice and composition, and received a diploma in composition in 1981 from professors Jan Zdeněk Bartoš and Jiří Pauer.

Filas is author of more than 90 opuses including symphonic works, cantatas, concertos, Te Deum, Requiem, a TV-Opera, compositions for big brass-band and vast number of chamber music. Filas uses a distinctly lyrical and emotional musical language with which he strives to maintain the distinct European musical traditions of some of the masters such as Verdi, Beethoven and Mahler.

In 2008 Filas was awarded the prestigious Gustav Mahler’s prize of European union of Arts for his compositions up to now.

Juraj Filas lives in Prague. In addition to composing he also lectures Composition in Music Faculty of the Academy of Performing Arts.