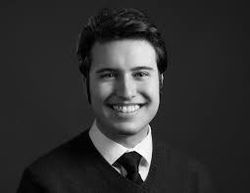 Julien Monick (b. 1994, Connecticut) is an American composer.

Monick received his Bachelor of Music degree from the University of Connecticut in 2016 where he studied composition with Dr. Kenneth Fuchs and horn performance with Professor Robert Hoyle. He also holds a Master's in Music for Composition (2019) from Cincinnati College-Conservatory of Music, where his principal teachers included Kenneth Fuchs, Michael Fiday, Douglas Knehans, Mara Helmuth and Robert Hoyle.

Utilizing a stylistic voice often described as inventive and filled with personality, Monick composes emotionally rich works for a wide variety of acoustic ensembles and fixed media. His music has been commissioned and performed along the East Coast and Europe by ensembles and performers such as the UConn Wind Ensemble, Roomful of Teeth, Zodiac Trio, Robert Hoyle, Matthew Russo, and others.

In February 2016, as part of a residency with Caroline Shaw and the vocal ensemble Roomful of Teeth, Monick arranged the third movement of Shaw’s Pulitzer prize-winning piece Partita for 8 voices for wind ensemble and voice octet. This arrangement saw a performance with Roomful of Teeth and the University of Connecticut Wind Ensemble under Dr. Jefferey Renshaw. A month later, Monick saw the premiere of his 24-minute work Symphony for Wind Ensemble under Dr. Renshaw and the UConn Wind Ensemble.

In 2016, Monick and his colleague Michael Denis O’Callaghan were the recipients of an IDEA Grant. Monick and O’Callaghan were funded to record a 60-minute album titled Granted with the alternative rock group Freighthopper, while conducting a case study on the social characteristics of the creative process through collaborative musical performance and composition. Since the completion of the project, Freighhopper has seen performances in various venues including Toad’s Place (CT), The Fez (CT), and Arlene’s Grocery (NYC).

Monick’s music has also been performed at the Northeast Horn Workshop (2013), again Kendell Betts Horn Camp (2015), and in Fiera di Primiero as part of the Music Academy International Chamber Festival (2016).