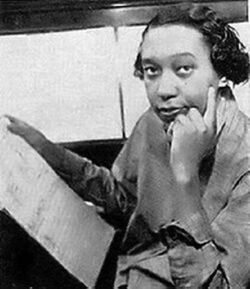 Ms. Perry received both her bachelor's and master's degrees from Westminster Choir College and went on to study composition in Europe from famous composers including Luigi Dallapiccola and Nadia Boulanger. A few of her honors include two Guggenheim fellowships, the Boulanger Grand Prize, and a National Institute of Arts and Letters Award.

Perry’s own exploration of race throughout her life can be easily perceived through the audible changes to her style as time passes. For most of her musical upbringing she was surrounded by white teachers and colleagues, from her years at mostly white Westminster Choir College to her time in Europe studying from white teachers. Her early pieces include idioms of spirituals and other African American influences, but as she continued in her largely white American and European education her music began to follow the compositional techniques of her mentors. These techniques can be seen in pieces such as her well known Stabat Mater for contralto and strings.

In the 1959 she returned to the U.S. after a long period spent in Europe, only to find that the racial atmosphere was nothing like he one she left behind years ago. During the '60s her view on race changed, and she began to embrace her race and express pride in her heritage, as well as anger at the injustice she was seeing around her. This affirmation of her racial identity can be heard in pieces like Symphony No. 10, which is also known as “Soul Symphony”, as well as her many settings of Spirituals such as “I’m a Poor Li’l Orphan in This Worl’” and “Free at Last”.