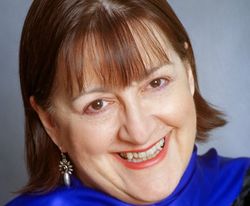 Judith Bingham (b. 21 June 1952, Nottingham, England) is an English composer and mezzo-soprano.

Bingham grew up in Sheffield and had already been composing actively for many years when she entered the Royal Academy of Music in 1970 to study composition and singing. Her teachers included Alan Bush and Eric Fenby, later Hans Keller, and Erich Vietheer (for singing).

Her individual musical voice soon attracted attention and led to many requests for works, notably for the King’s Singers, Peter Pears and the Songmakers’ Almanac. In 1977 she won the BBC Young Composer Award and from 1983 to 1996 she was a regular member of the BBC Singers, for whom she has written eleven works: at the end of 2005 she became their associate composer.

While her orchestral and choral works have made a wide impact, Bingham has won particular acclaim for her scores for brass – ensemble, band and solo; she is also fast becoming recognised as a major composer of organ music. In 2005 her huge orchestral piece Chartres was selected for the Encore project and conducted by James MacMillan.

She was the 2004 winner of the Barlow Prize for choral music, and has won three British Composer awards in 2004 and 2006 for choral and liturgical music. New projects include works for St Paul’s Cathedral, the BBC Singers, choirs in Utah and Albuquerque, an organ concerto, and a series of violin pieces for Peter Sheppard Skaerved.