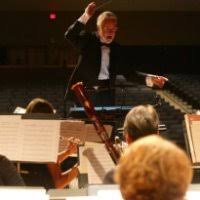 Jubilant Dance & Serenade is dedicated to Mr. Joe F. Phelps, Professor Emeritus of Trumpet of the Hayes School of Music at Appalachian State University. After arriving at Appalachian in 1971, Mr. Phelps taught trumpet for thirty years and continues to teach part-time. For the first sixteen years he was at Appalachian, he conducted the Symphonic Band and directed the Marching Mountaineers. During that time, the Marching Mountaineers grew from 80 to more than 220 members and became known as North Carolina’s Band of Distinction.

Jubilant Dance & Serenade is joyful music offered as a celebration of life even in the midst of our many challenges and difficulties. Hints of the ancient hymn In Dulci Jubilo (In Sweet Rejoicing) appear in the first movement as if anticipating its full statement as the theme of the finale. My hope is that those who perform this piece and all who hear it will be affirmed and uplifted and will feel like dancing, singing and rejoicing.