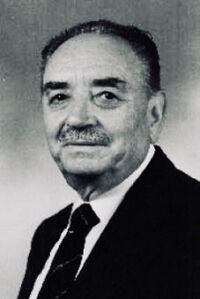 Mas Quiles began musical studies at a young age at the music school of the world-famous concert band, Liria’s Banda Primitiva. He joined the elite corps as a musician and was very quickly promoted to solo flautist. Meanwhile, he continued his studies of concert band music, counterpoint, fugue, composition and orchestration for wind orchestras at the Valencia Conservatory, completing degrees in flute and orchestral conducting in 1940.

In 1942 Mas Quiles passed examinations to qualify him as a military bandmaster and, beginning in 1946, was the bandmaster of leading Spanish bands. From 1965 onwards he combined his military duties with conducting the Valencia Symphony Orchestra and conducting orchestras of lyrical shows (generally zarzuelas). He has also been guest conductor in orchestras and bands in Argentina, the United States, France, Belgium and the Netherlands.

Mas Quiles was decisive in the development of the Valencian and Spanish band culture, contributing to the repertoire, not only with countless transcriptions that have become classics, such as Geschwindmarsch by Hindemith or Carmina Burana, by Carl Orff, but also with countless original compositions, including Dos Sonrisas, De oro y Plata, Clarinera Mayor, among many others.

Maestro Mas Quiles was recognized at the last WASBE Conference 2019 held in Buñol, Spain, with an award in recognition of his career and immeasurable contribution to the world of bands.