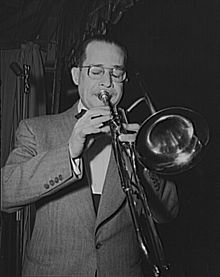 Juan Tizol (22 January 1900, Vega Baja, Puerto Rico – 23 April 1984, Inglewood, Calif.) He learned to play valve trombone from his uncle, a member of the San Juan Municipal Band. In 1920, he went to the United States, where he played with the Duke Ellington Orchestra from 1929-1944. He then played with Harry James’ Orchestra. Tizol helped introduce Cuban jazz to the United States. His most popular song is Caravan. He died on April 23, 1944, in Inglewood, California.