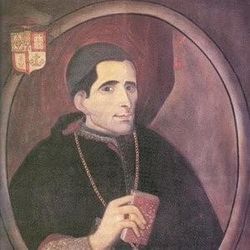 Born in what was then a province of Spain, as a boy García de Zéspedes was a soprano in the choir at Puebla Cathedral in 1630 under Juan Gutiérrez de Padilla. In 1664 he succeeded maestro Gutiérrez in an interim capacity. The title maestro became permanent in 1670. Although censured by the cathedral chapter more than once over disagreements as to his duties, he had a long career ended by his paralysis late in life.