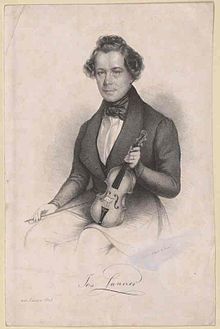 By the age of 12, Lanner was a violinist in Pamer's Quartet (Johann Strauss, Sr. played viola with this quartet). At 17, Lanner formed a trio that eventually grew to be a full orchestra. As its popularity increased, he formed a second orchestra, to which he assigned Johann Strauss, Sr. as conductor. Strauss left Lanner in 1825 to start his own orchestra, and this led to an ongoing rivalry.

Lanner was a self-taught composer and violinist. In 1829, he was appointed director of the Imperial Court balls. In 1842, he became the leader of the band of Wiener-Burgerregiment Nr. 2. He composed six marches for that group (three as Op. 130 and three as Op. 157).

Lanner is best remembered as one of the earliest Viennese composers to reform the waltz from a simple peasant dance to something that even the highest society could enjoy, either as an accompaniment to the dance, or for the music's own sake. He was variously dubbed "the Mozart of dance music" and "the waltz poet." He and Johann Strauss, Sr. are credited with laying the foundations of the Viennese waltz.

He was just as famous as his friend and musical rival Johann Strauss I, who was better known outside of Austria in their day because of his concert tours abroad, in particular, to France and England.