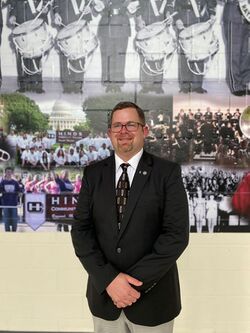 Joseph Benjamin Earp (b. 20 March 1984) is an American composer and educator.

Mr. Earp earned his Master of Music degree in music education from Anderson University in 2017. Mr. Earp also earned his undergraduate degree in music education from University of North Carolina Charlotte, 2006. During his time at U. N. C. Charlotte he studied trombone with Dr. Royce Lumpkin and conducting with Dr. Laurence Marks. In 2009, he was awarded the U. N. C. Charlotte Alumni Achievement Award.

As an active composer, he has been commissioned on several occasions, including band works for middle and high school ensembles, honor bands and brass choir. Some of the commissions of Mr. Earp’s work have come from Blair Smith (Coastal Fanfare, Mustangs Rebel the Knight of Wolves and Stone Mountain Fanfare), Dave Silden (The Nobles of Queen City), Kevin Townsend (WE ARE BRAVE! – Concert March) and Steve Petrucci (Among the Vikings and the Cast Iron Sixth). In addition to composition, he has arranged many works for marching band and small ensembles.