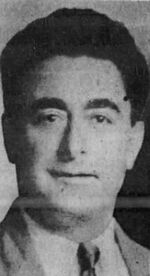 DeLuca began his musical career at the age of nine, at which time he commenced musical studies at Ripateatina, a province of Chieti. The young DeLuca entered the Conservatory of Music in Perugia and graduated when he was seventeen, studying composing, conducting, and other related subjects. He served as first trombonist in the orchestras of two grand opera companies and later became conductor of the municipal band of Ripateatina.

His fame as a conductor and soloist spread rapidly, and he served as guest conductor and soloist with many Italian bands. After coming to the United States in 1911, he achieved great fame as a euphonium soloist, appearing with many American bands, including Conway’s, Innes’, the Victor Herbert Orchestra, and most notably Sousa's. DeLuca also was first trombonist of the Philadelphia Orchestra for a short period, and had a music studio there. He also was a talented conductor. He directed the Lancaster (Pennsylvania) Military Band, and was appointed conductor of bands at the University of Arizona in 1928, a position he held until his death on October 22, 1935. He also directed the Tucson Symphony Orchestra for several seasons. During the summer preceding his death, he conducted the band of the California-International Exposition at San Diego.

DeLuca wrote more than 250 works for band, orchestra, chamber ensembles, and solo instruments. His most famous composition is Beautiful Colorado, a euphonium solo. Many of his marches were written while he was director of bands at the University of Arizona.