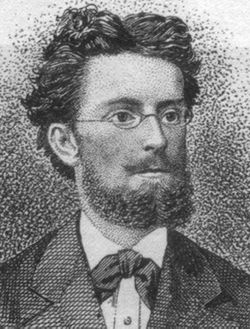 Josef Franz Wagner (20 March 1856, Vienna, Austria - 5 June 1908, Vienna) was a band leader and composer, often called the "Austrian March King." The son of a doctor, he was a leader among the boy sopranos in his church choir before attending school at the Benedictine Monastery in Seitenstettin (Seidenstatten), Austria. Later he studied harmony, form, counterpoint, and instrumentation with Johann Emerich Hasel at the Royal Military Institute in Kaschau, Hungary, followed by a tour of military duty in the army.

In 1878 the 22-year-old Wagner was appointed bandmaster of the Royal 47th Infantry Regiment Band in Trent (Trient) by Baron von Beck. He remained bandmaster with that regiment in Vienna, Marburg, and Graz, and in 1892 he succeeded Ludwig Schlogel as bandmaster of the 49th Infantry Regiment. Seven years later, after serving with the 49th in Krems, Brünn, and Vienna, Wagner retired from the army. He had become very popular as a conductor, especially in Vienna, but he was eager to devote more time to composing and also to conducting his own civilian ensemble for the Viennese public. He achieved both goals but, unfortunately, died only nine years later, at the age of 52.

Wagner had a highly productive, musical mind. At least 250 of his works were published, and his opus numbers exceeded 400—some researchers believe he wrote nearly 800 compositions. In addition to one (rather unsuccessful) operetta, Der Herzbub, composed in 1895, he wrote a number of overtures, concertos, songs, and other concert works, but he is best remembered for his waltzes and marches, of which he is credited with more than 100.

Loren Geiger, who arranged several marches from copies of original Wagner scores, found that “his tunes reveal a lot of Alpine yodeling style in the melody lines. They seem very happy tunes.”