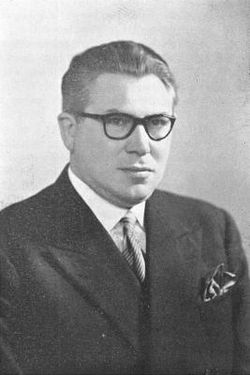 Moerenhout played the clarinet in the Laeken Wind Band from an early age. He studied at the music academy in his hometown. From the age of 18, Moerenhout studied composition, music theory and clarinet at the Royal Music Conservatory in Brussels. At an early age he put his acquired knowledge into practice. At the age of nine, he composed several works and at the age of seventeen, he founded a symphonic orchestra, "Excelsior", conducted a choir and a wind orchestra. He finished his studies at the conservatory with honorss. He further studied with the great composers of Belgian wind music Paul Gilson and August de Boeck, where he studied counterpoint, fugue and composition. In the meantime, he had also found the opportunity, in 1929, to act as solo clarinetist in the Music Chapel of the 8th Line of Brussels.

At first Moerenhout's compositional interest was mainly in symphonic music and the choir. Later it turned out that he had dedicated himself to wind music. Gradually very independent transcriptions of symphonic works for the wind orchestra emerged (by André Ernest Modeste Grétry, Dorpsdansen - Danse villagoise, Céphale et Procris en Zemir et Azor; by Peter Benoit, Concertsuite and Alva's Entry into Brussels; by Arthur Meulemans, the Second Dance Suite; from Flor Peeters, the Modaal Suite; and by Carl Orff, Carmina Burana).

His plans to give wind music a big boost with his own work were shattered by the war. Moerenhout thought his brainchildren were most safe in a briefcase with his military luggage, but it was precisely that briefcase that disappeared without a trace and with it the unique scores created with the greatest care. The war made him a prisoner of war in Germany, and after the miserable years of imprisonment, he returned in 1946.

On his own soil he found the atmosphere and the peace for creative work, and we were able to get to know the spirit children and musical creations of Moerenhout. His works appeared as if from a cornucopia that was opened late: the Second Orchestral Suite, the symphonic poem Images d'Eté, the Four Antwerp Painters Suite and the Spring Suite. Later on, some more compositions include Divertimento Burlesco, Ode aan de Schelde and Mini Midi Maxi.