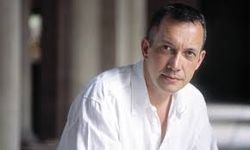 Jonathan Dove (b. 1959) is a British composer best known as a composer of operas and choral music.

His airport-comedy Flight (“one of the few successful comic operas of recent musical history” The Sunday Times) was premièred at Glyndebourne in 1998 and broadcast on Channel 4. In 2006 Flight received its Australian première during the Adelaide Festival for which it won the Helpman Award for Best Opera.

Dove has written over a dozen operas, including Siren Song and L’Augellino Belverde, which received its highly acclaimed UK première by the Guildhall School of Music & Drama in June last year. He has also written four large-scale community operas and a church opera, Tobias and the Angel, which re-opened the Young Vic's renovated theatre in October 2006. The Young Vic also presented The Enchanted Pig, a musical fairy tale, as its Christmas Show in December 2006, and the piece is currently touring the UK.

Dove's television opera, When She Died..., was first broadcast in 2002 to an audience of nearly a million viewers in the UK alone. A staged version of When She Died... will première at Kammeroper Vienna in March 2007 and Man on the Moon, a TV opera about the first moon-landing, was first broadcast on Channel 4 in December 2006. Kwasi & Kwame, a chamber opera adapted by Arthur Japin from his bestselling novel The Two Hearts of Kwasi Boachi, has been commissioned by Opera OT Rotterdam and toured the Netherlands from October 2007.

The opera L’altra Euridice is one of several works written for period instruments, including La dama ed il pulitore di Damasco and Le porte di Bagdad (all three of them operas for Musica Nel Chiostro); Dove completed this cycle of period instrument operas with an adaptation of Chaucer’s The Shipman’s Tale, An Old Way to Pay New Debts, in October 2006; Figures in the Garden and The Middleham Jewel were both written for the Orchestra of the Age of Enlightenment; and the Bach-inspired Köthener Messe, for the Akademie für Alte Musik, Berlin.

Dove’s choral music includes a song cycle, The Passing of the Year, and several anthems and carols, among them The Three Kings, commissioned by King’s College Cambridge, and The Far Theatricals of Day, settings of Emily Dickinson for soloists, choir, brass quintet and organ. His most recent works are The Darkling Thrush, commissioned by Trinity College Cambridge and It sounded as if the Streets were running with poems by Emily Dickinson for the Farnham Youth Choir. Solo song-cycles include Five Am’rous Sighs, Ariel, All You Who Sleep Tonight, Out of Winter and All the Future Days.

Recent instrumental commissions include Airport Scenes, an orchestral suite from Flight, and Hojoki, a dramatic cantata for counter-tenor and orchestra which was premièred by Lawrence Zazzo and the BBCSO under Jiri Belohlavek in September 2006. Dove’s instrumental works also include two quartets (the string quartet Out of Time and the saxophone quartet Tuning In), three concertos – Stargazer, a trombone concerto which will be premièred by Ian Bousfield and the London Symphony Orchestra under Michael Tilson Thomas in March 2007; Moonlight Revels, for saxophone, trumpet and strings; and the Mozart-inspired flute concerto, The Magic Flute Dances; and the orchestral overture Run to the Edge, The Crocodiamond (or Rita and the Wolf) for narrator and orchestra, and Across the Walls for brass and percussion.

Coming from a family of architects, Dove’s work has often been associated with buildings. He wrote music for the opening ceremonies of the Millennium Dome and the Millennium Bridge and provided the score for a film about the architect Carlo Scarpa. Film and architecture come together in one of his latest projects, Work in Progress, 14 site-visits for piano and orchestra, composed for the opening season of The Sage Gateshead (the new music-centre designed by Norman Foster) which also incorporated a film of the building process.