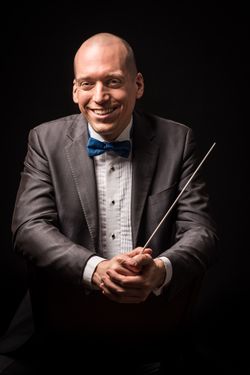 Jonathan Dagenais (b. 1978) is a Canadian composer, conductor and educator.

In addition to teaching in cegep and university (music theory, composition, analysis, ear training, musicianship and conducting), Mr. Dagenais enjoys an active career as a composer and arranger for wind orchestra. His works, that have been performed repeatedly by numerous Canadian university and high school ensembles, also appear on several professional recordings. His compositions are included in many North American concert band music festival syllabuses.

Jonathan Dagenais is also a sought-after conductor. He is the conductor and artistic director of the Orchestre à Vents Non Identifié (OVNI), a Montreal wind orchestra he co-founded in 2005. OVNI is an ensemble dedicated to collaborative and active listening, tone quality, refined interpretation as well as humour. In 2010 and 2017, he was appointed conductor of the McGill Wind Orchestra. In 2012 he was a guest conductor for the Montreal Pop Symphony Orchestra (OSPM). Jonathan Dagenais is also the conductor of the Cercle Philharmonique de Saint-Jean-sur-Richelieu (CPSJ), a position he has held since September 2012. In September 2015, he was named conductor of the Orchestre de jeux vidéo - OJV (Montreal Video Game Orchestra), an ensemble dedicated to video game soundtracks. A longtime fan of video games and their music, this was a natural marriage of two of his passions. Most recently in 2019, he was appointed principal conductor of the Ottawa Pops Orchestra (OPO).

Mr. Dagenais has been invited to adjudicate and/or give clinics at more than 25 North American music competitions and festivals. In 2017, he became the artistic director of Musicfest Quebec. He is regularly hired as an orchestra, band and chamber music conductor in Canadian summer music camps. He has been a guest conductor for many Canadian honour bands including The National Youth Band of Canada (NYB) in 2013, the most prestigious honour band in the country. Well known as an educator and public speaker, he is a Yamaha Canada Master Artist Educator, a guest conductor and clinician for Twigg Musique and the Fédération des Harmonies and Quebec Symphony Orchestras (FHOSQ) in addition of being the artistic director of MusicFest Québec.