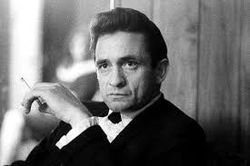 Cash served in the U.S. Air Force from 1950 to 1954, during which time he formed his first band, The Landsberg Barbarians, while stationed in Germany.

In 1954, Cash sold appliances in Memphis, Tenn., while studying to be a radio announcer. At night he played with guitarist Luther Perkins and bassist Marshall Grant. Cash worked up the courage to visit the Sun Records studio, hoping to get a recording contract. After auditioning for Sam Phillips, singing mostly gospel songs, Phillips told him that he didn't record gospel music any longer. It was once rumored that Phillips told Cash to "go home and sin, then come back with a song I can sell", although in a 2002 interview Cash denied that Phillips made any such comment. Cash eventually won over the producer with new songs delivered in his early rockabilly style. In 1955, Cash made his first recordings at Sun, Hey Porter and Cry! Cry! Cry!, which were released in late June and met with success on the country hit parade. Cash's next record, Folsom Prison Blues, made the country Top 5, and I Walk the Line became No. 1 on the country charts and entered the pop charts Top 20. Home of the Blues followed, recorded in July 1957.

Although primarily remembered as a country music icon, Cash's genre-spanning songs and sound embraced rock and roll, rockabilly, blues, folk, and gospel. This crossover appeal won Cash the rare honor of multiple inductions in the Country Music, Rock and Roll, and Gospel Music Halls of Fame. Cash was known for his deep, calm bass-baritone voice, the distinctive sound of his Tennessee Three backing band, a rebelliousness coupled with an increasingly somber and humble demeanor, free prison concerts, and a trademark look, which earned him the nickname "The Man in Black".

Much of Cash's music echoed themes of sorrow, moral tribulation and redemption, especially in the later stages of his career. His best-known songs included I Walk the Line, Folsom Prison Blues, Ring of Fire, Get Rhythm and Man in Black. During the last stage of his career, Cash covered songs by several late 20th century rock artists, most notably Hurt by Nine Inch Nails.