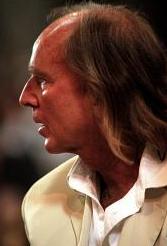 Tavener's father was an organist at St Andrew's Presbyterian Church in Frognal, Hampstead. At the age of 12, Tavener was taken to Glyndebourne to hear Mozart's The Magic Flute, a work he loved for the rest of his life. That same year he heard Stravinsky's most recent work, Canticum Sacrum, which he later described as "the piece that woke me up and made me want to be a composer".

Tavener became a music scholar at Highgate School (where a fellow pupil was John Rutter). The school choir was often employed by the BBC in works requiring boys' voices, so Tavener gained choral experience singing in Mahler's Third Symphony and Orff's Carmina Burana. He started to compose at Highgate, and also became a sufficiently proficient pianist to perform the second and third movements of Beethoven's Fourth Piano Concerto and, in 1961 with the National Youth Orchestra, Shostakovich's Piano Concerto No. 2. He also became organist and choirmaster in 1961 at St John's Presbyterian Church, Kensington (now St Mark's Coptic Orthodox Church), a post he held for 14 years.

Tavener entered the Royal Academy of Music in 1962, where his tutors included Sir Lennox Berkeley. During his studies there he decided to give up the piano and devote himself to composition.

Tavener first came to prominence with his cantata The Whale, premiered in 1968. During his career he became one of the best known and popular composers of his generation, most particularly for The Protecting Veil, which as recorded by cellist Steven Isserlis became a best-selling album, and Song for Athene, which was sung at the funeral of Princess Diana. The Lamb featured in the soundtrack for Paolo Sorrentino's film The Great Beauty.

Mr. Tavener was knighted in 2000 for his services to music and won an Ivor Novello Award. He was awarded an Honorary Fellowship by Sarum College in 2001.