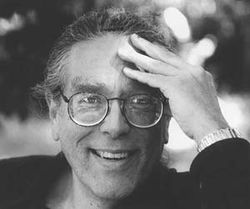 John Steinmetz (b. 1951, Oakland, Calif.) is an American composer, educator and bassoonist.

Mr. Steinmetz grew up in Fresno, moving to Southern California to attend California Institute of the Arts.

As a bassoonist, John Steinmetz plays chamber music with XTET and Camerata Pacifica, he appears with the Los Angeles Master Chorale and Los Angeles Bach Festival, and sometimes he contributes bassoon sounds to movie or television soundtracks. He has been a regular participant in the Oregon Bach Festival and a frequent guest faculty member at the Apple Hill Center for Chamber Music. He made three tours of Spain with the Bill Douglas Trio (one of those bassoon-oriented jazz-funk-Latin-Renaissance-Afro-Irish ensembles), he premiered Donald Crockett's Extant for bassoon and chamber ensemble with the Pittsburgh New Music Ensemble and recorded the piece with XTET, and he premiered his own concerto for bassoon and orchestra with the Santa Rosa Symphony.

Mr. Steinmentz teaches bassoon, chamber music, and a graduate seminar for performers, about transforming notation into performance at UCLA.

As a composer, Steinmetz's work centers primarily around wind chamber music, but has also written comic pieces that poke fun at the concert ritual and other human foibles.

John's work in education follows two general directions: helping listeners understand and enjoy music, and exploring ways to foster learning in any field-particularly learning that encourages both independent thinking and awareness of interdependence. During the 1980s and '90s, John worked with computer scientists at Atari, Apple, and Disney Imagineering, consulting on projects for Alan Kay, one of the inventors of personal computing. While computer scientists developed new software for enduser programming and tested it with children and their teachers, John explored the effects of new and old technologies on learning and expression. He composed pieces involving computers, he programmed software for classroom use, and he researched creative thinking in classrooms with education researcher Doreen Nelson. He wrote about learning environments and about the possibilities and pitfalls of computer use in classrooms

As Artist in Residence for two years at the Pasadena Conservatory of Music, John facilitated design teams of community members, parents, staff, and faculty to create new kinds of concert events and innovative enhancements for administration and teaching.

Since its first publication in 1993 in the NARAS Journal, John's essay about music and society, Resuscitating Art Music, has circulated widely among musicians, teachers, administrators, and other music-lovers. John's booklet How to Enjoy a Live Concert is published by Naxos Records. John also created and edited Music for Kids for Naxos, a book and recordings for children, with folk songs, dances, music from around the world, musical projects, and narrated introductions to aspects of music. His article Music for All appeared in the Journal of the Music Teachers National Association.