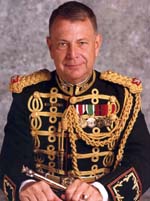 The career of Col. Bourgeois, the 25th director of the United States Marine Band, spanned nine presidential administrations, from Eisenhower to Clinton. He retired from the Marine Corps after serving as the band's director and music advisor to the White House for 17 years.

Under his leadership, the Marine Band presented its first overseas performances. In 1990, Col. Bourgeois led the band on a historic 18-day concert tour of the former Soviet Union. Col. Bourgeois directed 19 national concert tours - a tradition started by John Philip Sousa in 1891.

Since his retirement, he has continued to be extremely active as a guest conductor and clinician and is also an Artist-in Residence at his alma mater, Loyola University New Orleans.

Bourgeois also currently serves as Vice President of the Board of Trustees of the Sinfonia Educational Foundation. He was initiated as an honorary member of the Zeta Pi chapter of Phi Mu Alpha Sinfonia music fraternity at Loyola University in 1956, and as a member of the Fraternity's Alpha Alpha National Honorary Chapter in 1997. He was the Fraternity's 2000 recipient of the Charles E. Lutton Man of Music Award, presented at its national convention in Dallas, Texas.