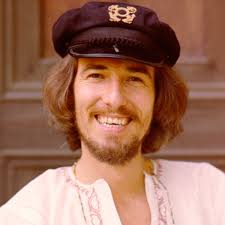 Phillips grew up in Alexandria, Virginia, where he was inspired by Marlon Brando to be "street tough." From 1942 to 1946, he attended Linton Hall Military School in Bristow, Virginia; according to his autobiography, he "hated the place," citing "inspections," and "beatings," and recalls that "nuns used to watch us take showers." He formed a group of teenage boys, who also sang doo-wop songs. He played basketball at George Washington High School, now George Washington Middle School in Alexandria, Virginia, where he graduated in 1953, and gained an appointment to the U.S. Naval Academy. However, he resigned during his first (plebe) year. Phillips then attended Hampden–Sydney College, a liberal arts college for men in Hampden Sydney, Virginia, but dropped out in 1959.

Phillips learned to play guitar and sang folk songs in Greenwich Village. In 1965, he formed the group The Mamas and the Papas with Dennis Doherty, Michelle Gilliam and Cass Elliott; Phillips became known as Papa John. The group spawned such hits as California Dreamin’, Monday, Monday and Words of Love. Phillips also wrote the smash hit San Francisco ("Be Sure to Wear Flowers in Your Hair"). In 1967, Phillips and music manager Lou Adler produced the Monterey Pop Festival, which gave rockers Jimi Hendrix, Janis Joplin and The Who their first national exposure. The Mamas and the Papas broke up in 1968.

Although Phillips had some success as a recording artist in later life, his success was limited by substantial and public drug use and trafficking, as well as accusations of incest by his eldest daughter, MacKenzie Phillips.