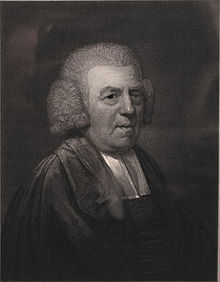 Newton started his career at sea at a young age, and worked on slave ships in the slave trade for several years. After experiencing a period of Christian conversion Newton eventually renounced his trade and became a prominent supporter of abolitionism, living to see Britain's abolition of the African slave trade in 1807.

In 1755 Newton was appointed as tide surveyor (a tax collector) of the Port of Liverpool. In his spare time, he studied Greek, Hebrew, and Syriac, preparing for serious religious study. He became well known as an evangelical lay minister. In 1757, he applied to be ordained as a priest in the Church of England, but it was more than seven years before he was eventually accepted.

In 1767 William Cowper, the poet, moved to Olney. He worshipped in Newton's church, and collaborated with the priest on a volume of hymns; it was published as Olney Hymns in 1779. This work had a great influence on English hymnology. The volume included Newton's well-known hymns: Glorious Things of Thee Are Spoken, How Sweet the Name of Jesus Sounds!, Let Us Love, and Sing, and Wonder, Come, My Soul, Thy Suit Prepare, Approach, My Soul, the Mercy-seat, and Faith's Review and Expectation, which has come to be known by its opening phrase, Amazing Grace.

Many of Newton's (as well as Cowper's) hymns are preserved in the Sacred Harp, a hymnal used in the American South during the Second Great Awakening. Hymns were scored according to the tonal scale for shape note singing. Easily learned and incorporating singers into four-part harmony, shape note music was widely used by evangelical preachers to reach new congregants.