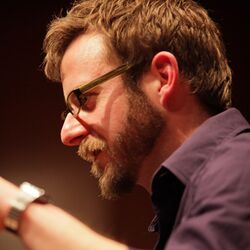 John Mayrose (b. August 1975) is an American composer, guitarist and educator.

Mayrose's music has been played throughout North America, Europe, and Australia, by among others, Duo 46, Amphion Percussion, and percussion ensembles at Truman State University, the University of Texas, Central Michigan University, and Lawrence University. He is the recipient of the first place prize in the Percussive Arts Society Composition Contest (2009), the ASCAP Plus Award, the Aliénor Harpsichord Composition Prize (2008), the William Klenz Prize in Composition (2001), the ASCAP Morton Gould Young Composer's Award (2004), the Bass Named Instructorship (Duke 2005/2006), the Mary Duke Biddle Fellowship, and several University of Wisconsin Oshkosh faculty development grants.

Dr, Mayrose is a member of the new music ensemble pulsoptional, a composer's collective based in Durham, North Carolina. His music has been featured in the Electronic Music Midwest Festival, and North Carolina HIP Festival.

An assistant professor of music at the University of Wisconsin Oshkosh, he has also taught at Indiana University South Bend and served as the postdoctoral fellow in music composition at the Lawrence University Conservatory of Music where he was also the director of the Improvisation Group of Lawrence University.