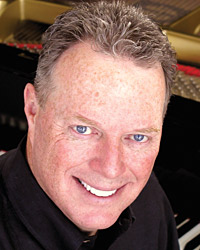 John Higgins (b. 1948) in an American composer, arranger and editor.

He began in the music field as the student arranger for the University of Michigan Band under Dr. William D. Revelli, and gained invaluable experience as a public school music teacher in suburban Chicago. John served as Illinois president of the American String Teachers Association, and his school concerts featured renowned soloists and conductors such as Skitch Henderson, Charlie Byrd, and Arthur Fiedler of the Boston Pops.

A co-author of the Essential Elements series of methods, John is best known for his many compositions and arrangements for choirs, bands and orchestras. As a composer of children's songs, he has collaborated with notables like John Jacobson, Roger Emerson and Emily Crocker on musicals such as How Does Your Garden Grow? and A Storybook Christmas. John has also arranged and produced a large catalog of children's music, including The Runaway Snowman, Peace Child, and Leslie Bricusse's Scrooge. His recording production for McGraw-Hill's Share The Music textbook series included music from Sesame Street, Disney films and a special project with the late Fred Rogers of Mr. Rogers' Neighborhood.

In two recent series of Broadway shows for young performers, John arranged and produced new versions of Annie, Guys & Dolls, Fiddler on the Roof, The King and I, and The Music Man. His two Grammy award-winning projects include arranging on Sandi Patti's Another Time, Another Place (Best Pop Gospel Album) and co-producing on Rob McConnell's Live in Digital (Best Big Band Jazz Album). He recently orchestrated and conducted the music for the stage premiere of Willy Wonka at the Kennedy Center in Washington, D.C.

John served as president of Jenson Publications before it became a part of the Hal Leonard Corporation, where he serves as Managing Producer/Editor. In addition to his writing and producing activities, he maintains a role in music education as a guest conductor, clinician and author.