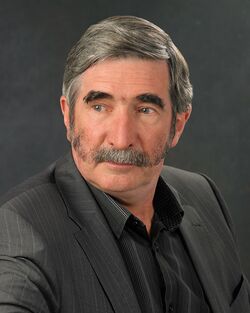 Dr. Buckley grew up in a rural environment and was introduced to traditional music learning the button accordion from the local player Liam Moloney when he was nine years of age. He studied flute with Doris Keogh and composition with James Wilson at the Royal Irish Academy of Music. His subsequent composition studies were in Cardiff with the Welsh composer Alun Hoddinott and with John Cage. He has been awarded both a Ph.D. and a DMus by the National University of Ireland

Buckley's music does not adhere to any particular compositional school. He has written a diverse range of work, from solo instruments to full orchestra. The list includes numerous commissions, amongst them Concerto for Organ and Orchestra and Campane in Aria for the National Concert Hall, Rivers of Paradise for the official opening of the Concert Hall at the University of Limerick, and A Mirror into the Light for Camerata Ireland’s inaugural concert, as well as many works for RTÉ, ensembles and individual performers. Buckley’s catalogue now extends to over 100 works, which have been performed and broadcast in more than fifty countries worldwide. His compositions have represented Ireland on five occasions at the International Rostrum of Composers and at six International Society of Contemporary Music festivals.

Amongst his awards are the Varming Prize (1977), the Macaulay Fellowship (1978), the Arts Council’s Composers’ Bursary (1982), and the Toonder Award (1991). In 1984 he was elected a member of Aosdána, Ireland’s state sponsored academy of creative artists.

Dr. Buckley was a senior lecturer and associate professor in music at St Patrick’s, College, Dublin City University between 2001 and 2017. A monograph on his life and work, Constellations: The Life and Music of John Buckley by Benjamin Dwyer was published in May 2011.