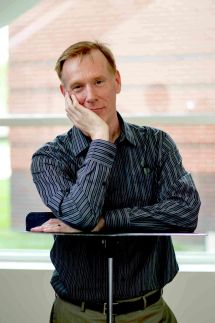 John Berners is an American composer.

After earning degrees in music and mathematics at Northwestern University, Dr. Berners studied composition privately with C. Curtis-Smith. He went on to the University of Michigan to earn an M.M. and Ph.D. studying under Evan Chambers, William Albright, Bright Sheng, Michael Daugherty and William Bolcom.

An enthusiastic teacher, Berners is Professor of Music at the University of Indianapolis. He has served on the faculties of the University of Iowa, American University in Washington, DC, the Colburn School in Los Angeles, California State University at Fullerton, Kalamazoo College and Interlochen Arts Camp.

From his first orchestral work, The Last Days of Calvin and Hobbes, to his chamber piece, Twinkle Toes, the music of John Berners shows a fondness for the irreverent and a fascination with American music from bebop to marching bands, along with influences from the Baroque era and the theater.

Honors include the Gold Medal in Song in the 2014 Boston Metro Opera International Composers Competition and winning the Concerto Competition of the Symposium Franco-Européen de la Trompette, a Meet the Composer grant with the Ronen Ensemble, and nomination by the American Academy of Arts and Letters for a Charles Ives Fellowship. He has won ASCAP concert music awards annually and received a Rackham Predoctoral Fellowship and Humanities Fellowship from the University of Michigan. In 2010 Berners’ work was featured on a concert named no. 1 on the list of “Top 5 Classical Performances” by the Indianapolis Star.