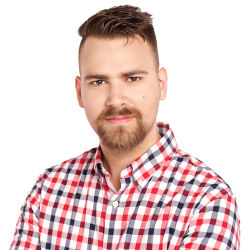 Joel Balzun (b. 1990, Calgary, Alberta) is a Canadian composer and baritone.

Mr. Balzun studied Music Composition and Vocal Performance at University of Calgary, Biola University, and the Eastman School of Music, where he earned his Master's degree under the tutelage of Jan Opalach and Benton Hess. At Eastman, he was the only Master's student awarded an applied teaching assistantship for secondary voice lessons; he was subsequently nominated for the Teaching Assistant Prize for Excellence in Teaching. He has studied composition with Robert Denham, David Eagle, Laurie Radford, and Christopher Wills; and voice with Reid Bruton, William Lock, Michelle Minke, and Richard Zeller. He has had the opportunity to augment his vocal studies through masterclasses with such artists as Andrew Eggert, Renée Fleming, Thomas Glenn, Ricky Ian Gordon, Vittorio Grigòlo, Catherine Robbin, Alan Smith, and Sanford Sylvan.

A recent recipient of the Raphael Bundage Young Artist Award from the Orpheus National Vocal Competition, Mr. Balzun has appeared successfully on both the operatic and concert stages. Since his professional debut in 2011 in Peter Michael von der Nahmer's award winning opera El canguro with the California International Theatre Festival, Mr. Balzun made his solo debut at the Kennedy Centre in 2014, singing excerpts from Turandot.

Also an accomplished composer, Mr. Balzun's “haunting and beautiful” music has received international recognition. In 2014, he was named a finalist for the prestigious ASCAP Morton Gould Young Composers Awards. Other accolades include winning the Dallas Wind Symphony’s 9th annual “Call for Fanfares”, as well as winning first prize in the Classical Marimba League International Composition Competition. In 2010, Mr. Balzun was also a prize-winner in the National Broadcast Orchestra’s Galaxie Rising Star Composers’ Competition, winning both the Young Composers Prize and the Grand Prize. In 2012, he was the youngest composer invited to participate in the Art Song Lab through the Vancouver International Song Institute. He was a guest presenter and composer at the CBDNA 2013 National Conference in Greensboro, North Carolina, as well as the 2014 CFAMC National Conference, where he was also a featured soloist.

Praised as “a composer to watch” by the Calgary Herald, Mr. Balzun has been the recipient of numerous commissions. His music has been performed across Canada, the United States, and Costa Rica, by ensembles such as Alberta Winds, Calgary Civic Symphony, Calgary Philharmonic Orchestra, CCM Wind Orchestra, Dallas Wind Symphony, the National Broadcast Orchestra of Canada, La Orquestra Vientos de Costa Rica, and Windago.

Mr. Balzun currently serves on the voice faculties of Biola University and Fullerton College. In addition to teaching voice lessons at both institutions, Mr. Balzun serves as the vocal coach and rehearsal pianist for Biola Opera at Biola University, where he also teaches and directs the Opera Scenes Workshop.