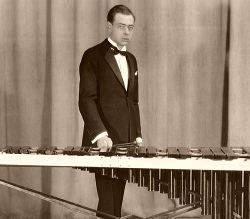 Joe was the older brother of George Hamilton Green. Joe and George made music together as young boys in Omaha, Nebraska. Joe joined Bohumir Kryl’s Band, then played with John Phillip Sousa as a percussionist and xylophone soloist form 1915 to 1919 when he rejoined his brother George. They moved to New York and formed the Green Brother’s Novelty Bands. George had already launched his recording career and the Green Brother’s Bands were a sensation. They were pioneers in early radio and performed the coast to coast broadcast in 1927. Joe was in great demand and can be heard on RCA Red Seal recordings as the timpanist with the NBC Orchestra under Arturo Toscanini.

Joe managed the business side of the Green Brothers. He was a virtuoso on the xylophone in his own right and was in great demand in New York musical circles. In the depression Joe was given a contract by General Motors for a weekly radio show. Joe’s deal was $64,000 a year, quite a lot of money in those days. He continued to perform and record until his untimely death in 1939.