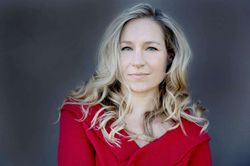 Ms. Hagen holds degrees in theory, composition, and vocal music education from St. Olaf College, as well as a mster's degree in composition from the University of Minnesota.

As a performer, Jocelyn began piano lessons at the age of three and became a professional accompanist by the age of 15. In 2000 she won first place in the Klatzkin Contemporary Keyboard Competition at Arizona State University (Alexina Louie, Music for Piano), and in 2003 soloed with the St. Olaf Orchestra (Francis Poulenc, Piano Concerto, first movement).

Ms. Hagen's first forays into composition were via songwriting, and this is very evident in her work. The majority of her compositional output is for the voice: solo, chamber and choral. In 2015, Test Pilot, her dance opera collaboration with choreographer Penelope Freeh, received a Sage Award for “Outstanding Design,” and the panel declared the work “a tour de force of originality.” Her melodic music is rhythmically driven, texturally complex, and has recently become more experimental in nature.

Her commissions include Conspirare, The Minnesota Orchestra, the American Choral Directors Associations of Minnesota, Georgia, Connecticut and Texas, the North Dakota Music Teachers' Association, Cantus, the Boston Brass, The Metropolitan Symphony, and The Houston Chamber Choir, among many others.

She is currently an artist-in-residence at North Dakota State University and regularly composes for their ensembles. For ten years she was a composer-in-residence for the professional choir she also sang in: The Singers, under the direction of Matthew Culloton. Her music has been performed all over the world, including Carnegie Hall and Lincoln Center in New York City.