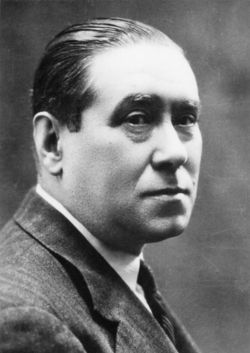 Joaquín Turina (9 December 1882, Seville, Spain – 14 January 1949, Madrid, Spain) was a Spanish composer of classical music. Turina's origins were in northern Italy (between Verona, Brescia and Mantova). He studied in Seville as well as in Madrid. He lived in Paris from 1905 to 1914 where he took composition lessons from Vincent d'Indy at his Schola Cantorum, and studied the piano under Moritz Moszkowski. Like his countryman and friend, Manuel de Falla, while there he got to know the impressionist composers Maurice Ravel and Claude Debussy.

In 1908 he married Obdulia Garzón, who was to bear him five children. She was the dedicatee of the Danzas Fantásticas, which he completed in 1919. Along with de Falla, he returned to Madrid in 1914, working as a composer, teacher and critic. In 1931 he was made professor of composition at the Madrid Royal Conservatory. He died in Madrid. Among his notable pupils were Vicente Asencio and Celedonio Romero.

His works include the operas Margot (1914) and Jardín de Oriente (1923), the Danzas Fantásticas (1919, versions for piano and orchestra), La Oración del Torero (written first for a lute quartet, then string quartet, then string orchestra), chamber music, piano works, guitar pieces and songs. Much of his work shows the influence of traditional Andalusian music. He also wrote a short one-movement Rapsodia Sinfonica (1931) for piano and orchestra. His music often conveys a feeling of rapture or exaltation.