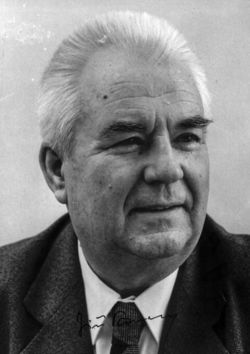 He was born to a miner's family and had to work his way to a career as a musician through his work as a teacher. At the age of thirty, he graduated from the Academy of Arts and Music. He worked successively as a teacher of the new Prague School of Music, the Music and Art Centre, the Ministry of Education, Science and Art, the Czechoslovak Radio, twice as the chief of the National Theatre Opera, the Union of Czechoslovak Composers, the Copyright Union (OSA), the Czech Philharmonic Orchestra (heading it for 22 years), and as Professor of Composition at the Academy of Arts and Music (AMU). From 1980-1982, he was the director of the National Theatre.

Pauer's institutional activity stimulated and inspired his creative work. His repertoire covers 12 works for orchestra, 4 concertos with orchestra, 16 compositions for solo instruments, 13 compositions for two or three instruments, 13 compositions for four or more instruments, 6 song cycles, 12 choral and cantata works and 7 operas. Many of his chamber works have received international acclaim such as his Sonatina for Violin and Piano, Sonata for Violoncello and Piano, First String Quartet Wind Quintet and Piano Trio. One of the most important features of his mature style is a feeling of dramatic expressiveness of the sung work and manner of work the the expressive means of wind instruments. He enriched wind literature with works which have become internationally successful and sought after by performing artists.