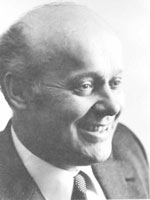 Jiri (pron. YIH-zhee) Laburda, born April 3, 1931, composer from the Czech Republic, has acquired his love for music from his parents and received elementary musical training in his native town of Sobeslav. His attitude to music in general, and composition, in particular, was also shaped by the Czech composers Karel Haba, Zdenek Hula and the musicologist, Eduard Herzog. Between 1952 and 1955, Laburda studied at the Pedagogical Faculty of Prague?s Charles University and later on at the Prague Teacher Training College (1957-1960). In 1970, he received the title of Doctor of Philosophy; his doctoral thesis was entitled The Symphonies of D. D. Shostakovich. His treatise, Didactic Problems of Modern Textbooks of Harmony, completed in 1973, is now the basis of his university textbook, Diatonic Harmony.

Jiri Laburda taught at various teacher-training colleges and institutions in Czech towns until he joined the staff of the Pedagogical Faculty of Charles University in Prague. He is presently on the faculty at the Conservatory of Music in Prague.

In his early days as a composer, Jiri Laburda devoted himself mostly to choral compositions which still assume a pride of place among his works. In composition, he draws on traditional means of expression. Stylistically, he ties on to neo-classicism in particular. As far as modern techniques of composition are concerned, it is small aleatoric and dodecaphony which are closest to his temperament.

Over the years, Laburda has composed an impressive number of works out of which more than 150 compositions have appeared in print. Laburda's compositions are easily understandable and are very well received by the broadest sections of music lovers. He has always maintained lively contacts with musicians and amateur choirs for which he composed very comprehensible works. To date, he has produced many compositions for children, notably minor works which children can easily play or sing. Among his technically demanding compositions are the virtuoso 1st and 2nd Partita for Solo Violin, numerous Sonatas (8 for piano, 4 for organ, 2 for trombone, oboe, clarinet, trumpet, tuba, accordion), Concertos (piano, 2 for cello, trumpet, trombone, organ, bassoon, accordion), Double Concerto for Violin and Cello, 9 Masses, Cantatas, Symphony, etc.

That Jiri Laburda's compositions are generally acclaimed and successful is corroborated by the countless prizes and distinctions which have been awarded thus far at domestic and international musical competitions. As far as domestic events go, in the jubilee competition sponsored by Czecho-slovak Radio Prague, he won the prize for his Piano Concerto, while carrying away several prizes from the nationwide choral competition at Jihlava. At international music festivals and similar events, he was awarded the Oscar Espla; prize for his Missa Glagolitica (1966); he won the Otto Sprekelsen prize in the city of Hanover, Germany, for his cantata, Metamorphoses (1968); in 1974, his Prelude for Solo Accordion received the SACEM-UPAC prize in Paris. Zeleny Majeran (Green Marjoram) for Mixed Choir received the first prize and also the Premio Cita; di Trento in 1974. Prizes in international competitions were also received in 1987, 1994 and 1996.