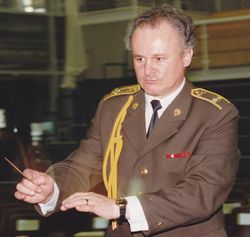 Jirí Volf (b. 2 November 1945, Prague, Czechoslovakia) is a Czech composer, percussionist and conductor.

Mr. Volf grew up in Statenice, a small country village northwest of the capital. He first developed an interest in music playing the accordion. He attended the Military Music School, where he played percussion as well as accordion. When Jirí was completing his third year there, Karel Pitra, chief conductor at Brno, came seeking a percussionist for his band. Volf came highly recommended, so he moved to Brno to fill that vacancy.

Volf served a 40-year tenure with of the Brno Garrison Band. After playing in the percussion section, he was promoted to the position of assistant conductor and drum major in 1978. In 1987 he succeeded Jaroslav Kubacek as chief conductor, a position he held until 2002.

As a composer, Volf has written about 80 original pieces and 40 arrangements.