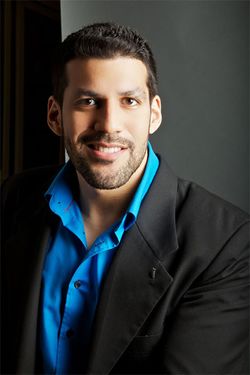 Dr. López Bellido studied with Enrique Iturriaga from 1998 to 2000 at the National Conservatory of Music in Lima, and with Veli-Matti Puumala and Eero Hämeenniemi from 2000 to 2007 at the Sibelius Academy in Helsinki, from where he obtained his Master of Music degree. He completed his Ph.D. in music at the University of California-Berkeley in May of 2012 with Edmund Campion.

His works have been performed by leading orchestras around the world including the Chicago Symphony, Philadelphia Orchestra, Boston Symphony, Sydney Symphony Orchestra, and his music has been heard in prestigious venues such as Carnegie Hall, Sydney Opera House, Gewandhaus Leipzig, Kennedy Center, and during the Youth Olympic Games in Singapore. His music has been featured in numerous festivals, including Tanglewood, Aspen, Grant Park, Darmstadt, Donaueschingen and the Nordic Music Days.

As part of the Renée Fleming initiative, the Lyric Opera of Chicago commissioned him a full-length opera based on the bestselling novel Bel Canto which premiered on December 7, 2015. His work Fiesta! has been performed almost 90 times worldwide, ranging from Australia to Siberia, thus making it one of the most performed contemporary orchestral works.

He has been awarded numerous prizes, among them: a 2017 Hewlett50 Arts Commissions from the Hewlett Foundation, TUMI USA Award 2016, Musician of the Year 2015 by Opera Peru and "El Comercio"; Honorable Mention at the 2015 Barlow Prize Competition; Special Mention at the 2015 Casa de las Américas Composition Prize; 2014 Antara Prize in recognition for his outstanding career; 2013 Prince Prize from the Prince Charitable Trusts; and First Prize at the 2012 and 2011 Nicola de Lorenzo Music Composition Contest.

Dr. López Bellido is a member of Suomen Säveltäjät (Society of Finnish Composers), ASCAP (American Society of Composers, Authors and Publishers), Circomper (Circle of Composers of Peru) and the San Francisco Chapter of the Recording Academy (Grammy). An album dedicated entirely to his orchestral works was released on August of 2015 under the Harmonia Mundi label.