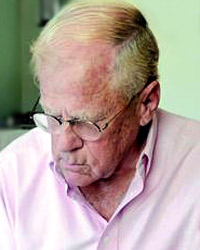 Jim Andy Caudill (b. 1932, Ashland, Ky.) is a retired American composer and educator.

As an educator, Mr. Caudill taught in the public schools until 1968 when he accepted a position at Pikeville College (Ky.). While at Pikeville College, he taught trumpet, music theory, orchestration, teaching methods, and conducted its wind ensemble, retiring in 1997.

Notable publications for band include Landmark Overture and Folklore for Band, among others.