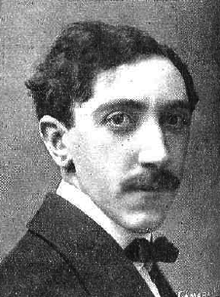 After completing his early studies with the Piarists and the Jesuits of Zaragoza, Gurudi moved to Madrid, where he received lessons from Arina Valentin. Later, in Bilbao, he was involved in the activities of the society called "El Cuartito". He received violin lessons from Lope Alana and studied harmony with José Sáinz Besabe. On 28 January 1901 he gave his first public concert with the Philharmonic Society of Bilbao. At the age of 18 he enrolled in the Schola Cantorum in Paris, studying organ with Abel Decaux, composition with Auguste Sérieyx, and fugue and counterpoint with Vincent d'Indy. Here he met Jose Maria Usandizaga, with whom he developed a deep friendship.

He then moved to Brussels, where he studied with Joseph Jongen and in Cologne with Otto Neitzel, following the recommendations of Resurrección Maria de Azcue. In June 1912 he was appointed director of the Bilbao Choral Society. In 1944 he began working at the Madrid Conservatory, where, years later, he became director.

Despite his intense activity as an organist, choir director and teacher, Guridi was largely devoted to composition. The variety of genres he cultivated is very wide, ranging from symphonic music to film music, operas and operettas, chamber music, choral music, songs and music for children.

Gurudi was a key player in 20th century Spanish and Basque music. His style fits into the late Romantic idiom, directly inherited from Wagner, and with a strong influence from Basque culture. Among his best known works are the zarzuela El Caserío, the opera Amaya, the orchestral work Ten Basque Melodies and his organ works, where the Triptych of the Good Shepherd can be highlighted.

Guridi's music writing is characterized by the clarity of its formal organization, by the strength and richness of its harmony and the inspiration of the melodies. He was one of the main creators of the musical nationalism in Euskadi and Spain.