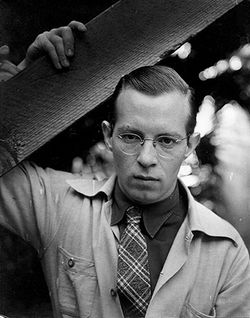 Jerome Moross (1 August 1913, New York City – 25 July 1983, Miami, Fl.) was an American-born composer. During his teenage years, Moross met Bernard Herrmann. The two composers became friends, and their friendship lasted until Herrmann's death. He composed works for symphony orchestra, chamber ensembles, soloists, musical theatre. He also orchestrated motion picture scores for other composers. He is best known for the excellent quality of his music for film and television.

He became a talented piano player and composed music for the theater. In the 1940s he began to work in Hollywood, California, where he would compose the music scores for sixteen films from 1948 to 1969.

His best-known film score is that for the 1958 movie The Big Country, for which he was nominated for an Academy Award for Original Music Score. According to Moross, he composed the main title after recalling a walk he took in the flat lands around Albuquerque, New Mexico, shortly before he moved to Hollywood in the late 1930s.

His other works include the music for the films When I Grow Up (1951) The Adventures of Huckleberry Finn (1960), The Cardinal (1963), Rachel, Rachel (1968) and The Valley of Gwangi (1969). He also composed the main theme for six seasons of the television western series Wagon Train, the theme of which was based on his score for The Jayhawkers!. He also orchestrated for other composers, including such films as Our Town for Aaron Copland and The Best Years of Our Lives for Hugo Friedhofer.

Moross's concert works include a symphony, which was premiered by conductor Sir Thomas Beecham on 18 October 1943 in Seattle, Washington, a sonata for piano duet and string quartet.