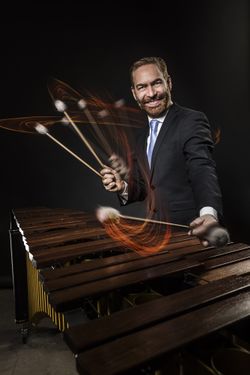 Jerker Johansson (b. 9 May 1967, Sweden) is an arranger, composer, conductor and entertainer

After study at the University of Gothenberg School of Music he was appointed music director for GoteborgsMusiken in 1992, also serving as music director of the Swedish Air Force Band, a position he held until 2004. Over the years he has given first performances of several hundred new and old original works for band, more than thirty of his own compositions, and 120 of his arrangements.

Johansson quickly established himself in the field of repertoire for wind band and music hall. He has conducted and arranged for most of the major orchestras in Sweden and many leading singers and entertainers, and many of his recordings for Naxos have received high praise.

Besides his work in festivals, in the recording studio and with renowned orchestras, he is a popular guest for seminars and an inspiration for amateur bands and orchestras. In 1996 he was awarded the William Lind prize and in 2005 the City of Gothenberg Badge of Merit.