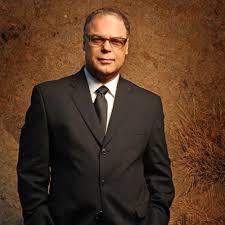 Tyzik first fell in love with music at the age of eight when he saw a drum and bugle corps march by in a local parade. "For my ninth birthday, I said, 'I want a bugle!'" recalled Tyzik. But when he opened the case, he was crushed. "It wasn't a bugle. It was a cornet!" He quickly forgot his initial disappointment, however, and began studying cornet with a teacher who had performed in the Goldman Memorial Band in the 1920s. He immediately excelled. "I was always extremely serious about music, even at a young age. I was frustrated with the other kids when they didn't take it as seriously as I did," recalled Tyzik, adding, "I've always given all of my energy to anything I'm passionate about."

Tyzik's teachers and friends began pushing him to audition for the Eastman School of Music. Tyzik recalls, "Eastman was a pivotal place in my development because I was exposed to legends there, like Rayburn Wright. At Eastman, Tyzik also met Chuck Mangione, the great band leader. Since Mangione was tough on him in college, Tyzik was happily surprised when Mangione offered him a job. Over the six years following, he worked under Mangione, soaking in every part of the music business.

Tyzik composed his first piece for wind ensemble entitled Trilogy, a three-movement composition based on themes of Howard Hanson. He composed and dedicated each movement to three of his Eastman faculty mentors: Sam Adler, Donald Hunsberger and Warren Benson.

Performing in the 1970s with Mangione's jazz orchestra for crowds ten and twenty thousand strong showed Tyzik that the possibilities for the orchestra beyond classical music were unlimited. "People came to see Chuck, but they also came for the music. So even though I was classically trained, I went in a more jazz, pop, and rock direction for nearly twenty years, always trying to synthesize those musical elements for symphony orchestra."

Tyzik encountered the next great opportunity of his career when he met pops legend Doc Severinsen, then leader of the Tonight Show band. Tyzik and virtuoso trumpet player Allen Vizzutti collaborated on a trumpet concerto specifically for Doc to record.

In 1983, Tyzik and Vizzutti were invited to create a new pops program for the Rochester Philharmonic Orchestra (RPO). "We put together a half of a concert that had both jazz and classical styles. People went crazy! We found that the synthesis of jazz, pop and classical musical elements worked everywhere." Tyzik had initiated the basic programmatic style that he has been perfecting ever since.

After touring his original program with a few orchestras, Tyzik found himself in a transitional period. "I was feeling frustrated. I knew I needed to grow musically. I went to see the great American composer, Sam Adler. Working with Sam changed my life and inspired me to think of new directions in music."

Armed with new confidence, Tyzik approached the RPO in 1993 at a time when the orchestra was in a tenuous financial position. Their music director had just left, and the orchestra was on the verge of shutting down. "I thought I could make the RPO pops into something better than it was. So I went to the CEO, and told her my idea -- to do works from Mozart to Count Basie on the same program, featuring members of the orchestra as soloists -- and she went for it!" Tyzik put together a unique concert. One month after the performance, he was offered the job of principal pops conductor.

Over the years, Tyzik has performed with orchestras in numerous schools across the country. "Some of my most incredible moments with orchestras have been outside the concert hall." In Rochester, he has won awards for his work in the public schools, including a Rotary International fellowship for community service. In addition to his educational work, Tyzik is an active member of the artistic community as a member of the board of managers at the Eastman School, where he also served on faculty for six years.