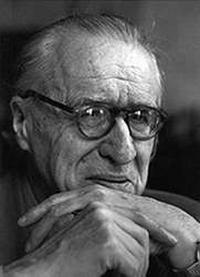 Françaix's natural gifts were encouraged from an early age by his family. His father, Director of the Conservatoire of Le Mans, was a musicologist, composer, and pianist, and his mother was a teacher of singing. Jean Françaix studied at the Conservatoire of Le Mans and then at the Paris Conservatory, and was only six when he took up composing with a style heavily influenced by Ravel. Françaix's first publication, in 1922, caught the attention of a composer working for the publishing house who steered the gifted boy toward a gifted teacher, Nadia Boulanger (who, after her sister's death in 1918, devoted her life to conducting, playing the organ and teaching). Boulanger soon became among the most celebrated teachers of musical composition in the 20th century with a list of students whose names include Aaron Copland, Leonard Bernstein, Elliott Carter and many more. Boulanger encouraged Françaix's career, considering the young composer to be one of the best, if not the best, of her students. Noted pianist and pedagogue Isidor Philipp also taught him. Françaix himself often played his own works, to public acclaim; notably in the premiere of his Concertino for Piano and Orchestra at the festival of Baden-Baden in 1932.

By 1932 Françaix had his Huit Bagatelles played at the Vienna Festival by the Kollisch Quartet and himself at the piano, while in Paris his Concertino for piano and orchestra was heard in 1933. Françaix's compositions continued to be played during the 1930s in Paris. A String Trio (1933), a Fantaisie for cello and orchestra, Three duos for two sopranos, a Sonatine for violin and piano, a Quintet and a Serenade for small orchestra (1934). 1935 saw the premiere of his Quadruple Concerto for Flute, Oboe, Clarinet, Bassoon and Orchestra, and 1936 of a piano concerto.

Jean Françaix's primary occupation was his extraordinarily active compositional career. He remained prolific throughout his life; even in 1981 Françaix described himself as "constantly composing", barely finishing one piece before beginning another, and continued thus until his death in 1997. Françaix was named an Officier de la Légion d'honneur in 1991.

Since he was a virtuoso pianist, many of his works feature the piano, particularly his numerous chamber works which he wrote for nearly every orchestral instrument and standard ensemble.

Françaix's style is marked by lightness and wit (a stated goal of his was to "give pleasure"), as well as a conversational style of interplay between the musical lines. It changed little throughout his career; while he was influenced by composers he admired (such as Emmanuel Chabrier, Igor Stravinsky, Maurice Ravel, and Francis Poulenc), he integrated what he picked up into his own distinct aesthetic, which was already evident in his early works.