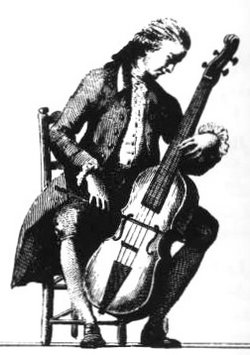 Barrière first studied the viol, and published a set of viol sonatas. In due course, however, he became a skilled cellist during a period when the cello was gaining popularity over the viol in France, and later came to completely replace it, as indeed had already happened in Italy some 40 years prior. He became one of the best known virtuoso cellists of his time.

In 1731 Barrière went to Paris, and entered the Academie Royale de Musique . He was accorded special privileges by King Louis XV at Fontainebleau in 1733 to compose and publish several sonatas and other instrumental works.

After his first book Livre I - Sonates pour violoncelle et basse continue was a success, in November 1733, Barrière published a second edition of it in 1740. His second book, Livre II, was published around 1735.

He went to Italy in 1736 to study with the well-known Italian cellist Francesco Alborea. He undertook a further long tour in Italy in April 1737 and returned to Paris in summer of 1738, to appear at the renowned Concert Spirituel on 15 August and 8 September where he impressed his audience with "grand precision", according to the local press. In 1739, a new 12-year privilege was granted to him at Versailles. The following year he published his Livre III, and other works followed suit the following year.

Whilst not well known to the general public today, Barrière was so renowned a few years after his death that Pierre-Louis Daquin de Chateau-Lyon did not hesitate to describe him as: "the famous Barrière, deceased only recently, possessed all that one can desire...few could perform as well as he." His works are best known for their sensitivity and fine tonality, their emotional resonance and deep sonority. Several of his works are quite demanding in terms of technical performance.