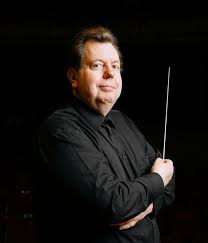 Jean-Pierre Haeck (b. 1968, Verviers, Belgium) is a Belgian composer, arranger and conductor.

Jean-Pierre Haeck began studying music at the Conservatory of his hometown, Verviers. After the Greco-Latin humanities, he studied at the Royal Conservatory of Liege, where he won several awards in conduction, percussion, trombone and theory.

In 1994 he founded the Ensemble Orchestral Mosan, where he became musical director and founded his own record label, "JPH Productions". Meanwhile, he is also the assistant director of music at the Friedrich Pleyer Royal Opera of Wallonia. He then directed several concerts with the Orchestre Philharmonique de Nice, the Great Orchestra of Harmony of the European Communities, the Favorite at Bordeaux Opera, the Périchole to Monte-Carlo. In 2002, Haeck was appointed principal guest conductor of the Orchestre Philharmonique de Liège.

Since 2009, in addition to conducting, Haeck has been composing music for symphony orchestras, wind bands and orchestration.