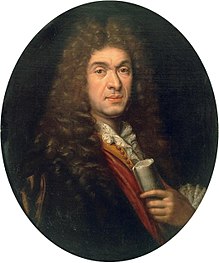 Lully's general education and his musical training during his youth in Florence remain uncertain, but his adult handwriting suggests that he manipulated a quill pen with ease. He used to say that a Franciscan friar gave him his first music lessons and taught him guitar. He also learned to play the violin. In 1646, dressed as Harlequin, the boy attracted the attention of Roger de Lorraine, chevalier de Guise, who took the boy to Paris. The teenager's talents as a guitarist, violinist, and dancer quickly won him the nicknames "Baptiste", and "le grand baladin" (great street-artist).

Lully attracted the attention of young Louis XIV, dancing with him in the Ballet royal de la nuit. By March 16, 1653, Lully had been made royal composer for instrumental music. His vocal and instrumental music for court ballets gradually made him indispensable. When Louis XIV took over the reins of government in 1661, he named Lully superintendent of the royal music and music master of the royal family.

From 1661 on, the trios and dances he wrote for the court were promptly published. As early as 1653, Louis XIV made him director of his personal violin orchestra.

Lully's music was written during the Middle Baroque period, 1650 to 1700. Typical of Baroque music is the use of the basso continuo as the driving force behind the music. Lully's music is known for its power, liveliness in its fast movements and its deep emotional character in its slower movements. Some of his most popular works are his passacailles (passacaglias) and chaconnes, which are dance movements found in many of his works such as Armide or Phaëton. The influence of Lully's music produced a radical revolution in the style of the dances of the court itself. In the place of the slow and stately movements which had prevailed until then, he introduced lively ballets of rapid rhythm, often based on well-known dance types such as gavottes, menuets, rigaudons and sarabandes.

Through his collaboration with playwright Molière, a new music form emerged during the 1660s: the comédie-ballet which combined theater, comedy, incidental music and ballet.

Lully died from gangrene, having struck his foot with his long conducting staff during a performance of his Te Deum to celebrate Louis XIV's recovery from surgery. He refused to have his leg amputated so he could still dance. This resulted in gangrene propagating through his body and ultimately infecting the greater part of his brain, causing his death.