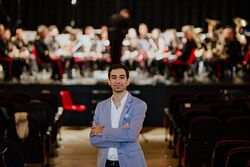 Javier Pérez Garrido (b. 20 July 1985, Madrid, Spain) is a Spanish composer and clarinetist.

Javier Pérez Garrido has studied with many renowned musicians in Spain and other countries, earning various high degrees from the Conservatory and the University of Murcia.

As a composer, Pérez Garrido has created an extensive and diverse catalogue of a hundred works. Likewise, music institutions and musicians around the world, such as the International Trumpet Guild, the European Union Youth Wind Orchestra or the Banda da Armada Portuguesa, have commissioned him to write new pieces. His compositions have been premiered and performed in European as well as American and Asian countries, and listened to by outstanding personalities, including the King and Queen of Spain.

Pérez Garrido has taken part in numerous national and international music contests and has been awarded more than 30 prizes, including the International Composition Contest of Symphonic music for bands 'Vila de Muro', the gold, silver and bronze medals at the Global Music Awards in California, and the 'Akademia Music Awards' in Los Angeles. He has also been officially nominated for the prestigious Hollywood Music in Media Awards and the'Jerry Goldsmith Awards, among others.

As a clarinetist he played as a soloist with the European Union Youth Wind Orchestra in the 2009 and 2001 tours, and as a member of the orchestra in the 2013 tour, which premiered one of his compositions. He has also played with the Spanish Youth National Orchestra (2007 - 2011), the'FIOJ International Orchestra (2007) and the Murcia Youth Orchestra, among others. He has performed in many of the most important European concert halls. Furthermore, he has offered frequent recitals as a soloist, among which are the the premieres of 30 compositions by worldwide composers at Fifteen Minutes of Fame, New York.

Nowadays [2021], Pérez Garrido works as a professor of Composition at the Conservatorio Superior de Música de Navarra in Pamplona, Spain.