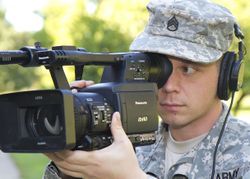 Sergeant First Class Jared Morgan (Vernon, N.J.) came to The U.S. Army Field Band from the New Jersey National Guard. Originally enlisting as a French horn player, SFC Morgan played with the 63rd Army Band for 12 years. While with the 63rd Army Band, he earned a Bachelor of Arts in Broadcasting from Montclair State University. At the time, his civilian career was his focus, and SFC Morgan worked as an editor at networks like CBS Sports Network and Major League Baseball Network, where he would eventually win an Emmy Award.

In 2009 SFC Morgan was assigned to The United States Army Soldier Show as an audio engineer, and his work there would eventually lead him to the Media Producer position he holds with the Army Field Band today.