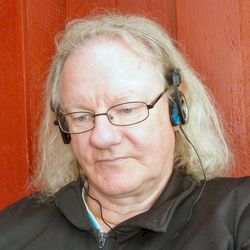 Sandström grew up in Stockholm. He studied at the Luleå University of Technology's Piteå School of Music (1974–1976) and completed his music training at the Royal College of Music, Stockholm, studying music theory (1978–1982) and composition with Gunnar Bucht, Brian Ferneyhough and Pär Lindgren (1980–1984).

He joined the faculty of the Piteå School of Music in the 1980s and was appointed professor of composition in 1989.

Sandström began his musical career as a chorister, and his work list includes a large part of vocal, opera and choral music. His other widespread international success Det är en ros utsprungen (Es ist ein Ros) (1990), is one of his most devout works. His choral music underlines the catholicity and seems to form a link with an inner, gentle world, the emotional abstract.

In 1988 to 1989 he composed his first concerto for trombone and large orchestra, which became famous as the Motorbike Concerto, revised in 2002 to a Motorbike Odyssey. In 1990 he composed Es ist ein Ros entsprungen (Det är en ros utsprungen), placing the familiar Praetorius setting in slow motion in an eight-part a cappella setting.

In 1991 he completed Från Mörker till Ljus (From Darkness to Light) for reader, baritone and chamber orchestra, based on poems by Folke Isaksson, were inspired by an altarpiece from Antwerp in Gammelstad, with a focus on the Passion. In 2008 his Rekviem (Requiem) on a Swedish text by Christine Falkenland was first performed at Stockholm's Hedvig Eleonora Church

Sandstrom often deals with the naive, ordinary feelings, ordinary people, the misunderstood hero. A critic once wrote that he composes “music that pats you on the hand and says ‘there, there, it’ll be all right’”.

Different lines of composing co-exists in Sandström’s music. Minimalism, Eastern philosophy as well as the world of serialism were early influences on his music. For many years Sandström also worked at developing the form of overtone harmony that is known as spectral analysis. In more music theatrical pieces as Don Quixote and the opera Macbeth 2 (premiered at the Gothenburg Opera in spring 2001), he means to let the whole world outside in on stage. As pictured in the Motorbike Concerto, Sandström and his music is constantly on the move aiming to explore whatever aspect of life and music takes his fancy: ‘Every morning when I wake up, I want to be surprised by whatever I might think up today!’