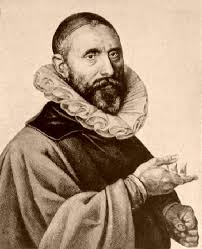 Jan Pieterszoon (Peter’s son) Sweelinck inherited his second name from his father, the organist Pieter Swybertszoon (Swybert’s son), and his last name from his mother, Elsken Sweling. While he was still a baby, the family moved to Amsterdam, where Pieter became organist at the church of Saint Niklaus (later known as the Oude Kerk—Old Church). About six years after his father’s death in 1573, Jan became organist in the same church. For the next 40 years, he played organ in the church, gave concerts, composed, and taught keyboard students. Sweelinck also married and fathered six children. His salary was paid by the city government of Amsterdam, not by the church. Although Sweelinck did not visit the distant cities, including Venice, he learned the music of other European composers from the plentiful printed music available at that time.

Sweelinck is remembered as being the leading player, composer, and teacher of early Baroque organ music in the Netherlands. He originated an involved and ingenious form of the keyboard fugue which reached its zenith in the music of J. S. Bach. Among his famous German students were Samuel Scheidt, Heinrich Scheidemann, and Jakob Praetorius.

Sweelinck was a prolific composer. When Breitkopf & Hartel published a complete edition of his scores (1894-1901), they filled 12 volumes. He composed approximately 75 works for keyboard, including harpsichord as well as organ. They included mostly fantasias, toccatas, and variations, as well as a smaller number of ricercares, chorale settings, and dances. His choral works were much more numerous, but generally less important. They include French-style chansons, Italian-style madrigals, motets, and other sacred music. Band transcriptions of Sweelinck’s works include Ballo del Granduca, Est-ce Mars and Variations on Mein junges Leben hat em End.