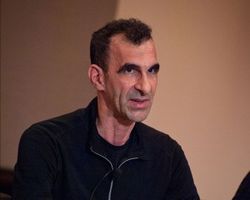 Sharifi was born to an Iranian father and an American mother. At an early age, Sharifi was exposed to jazz and Middle Eastern music by his father and to European classical and church music by his mother. He began to study classical piano at age five and quickly developed a thirst for musical instruction and a desire to improvise. At age nine he began studying guitar and drums, and at age ten added flute.

Sharifi’s previous work ranges from composing scores for major motion pictures, performing and recording with his own world music ensemble to producing and arranging for other artists. He also served as an arranger for President Barack Obama’s Inaugural Concert We Are One. He has performed at many prestigious venues throughout the world, including Carnegie Hall and Radio City Music Hall in New York, the Hollywood Bowl and the Getty Center in Los Angeles, the Opera Theater in Sydney, Cité de la Musique in Paris and Svetlanovsky Hall in Moscow.

Jamshied Sharifi’s remarkable professional career as a composer and keyboardist, producer and arranger, has included work for motion pictures, his own world music ensemble, collaboration with artists such as Ray Charles and arrangements for the Inauguration of President Barack Obama. Sharifi is an MIT and Berklee College of Music alumnus.